Background on Aliso Canyon and Actions to Date

The Aliso Canyon Facility consists of 114 storage injection and withdrawal wells that were drilled over a period of time that covers from 1939 to 2014. Total storage capacity for the Aliso facility is 86 billion cubic feet (Bcf) of natural gas, making it one of the largest natural gas storage facilities in the United States. Natural gas is injected into the old sandstone reservoir formation at approximately 8,500 feet below ground surface for storage and withdrawn for transmission and sale in response to market conditions. Stored gas is withdrawn during times of high demand and transported through transmission pipelines to ensure reliability.

Drilling of the SS-25 Well that began leaking in 2015 was started on October 1, 1953, and the well was completed in April 1954. During drilling, the original borehole was abandoned due to an unrecoverable drill string and tool set that were lost in the hole.

In May 1973, SS-25 was reworked to convert it to a gas storage well. As a gas storage well, it was operated by injection and withdrawal through both tubing and casing; meaning the casing functioned as a single barrier to the environment or the borehole. Storage wells are regulated by the state of California's Division of Oil, Gas and Geothermal Resources (DOGGR). The California Public Utilities Commission (CPUC) regulates the aboveground pipelines and appurtenances in the storage fields.

Where is natural gas being stored?

Table 1. below shows all the States in the union that have regulations regarding natural gas storage well construction, maintenance, and plugging and abandonment as of August 2016.  It should be noted that only California, Kansas, and Pennsylvania have regulations addressing well integrity at all three stages.

On October 23, 2015, at approximately 3:15 p.m., a Termo Company employee who was driving by the well reported the smell of gas around Standard Senson 25 (SS-25) Well pad to the Southern California Gas Company (SoCalGas) that owns and operates the facility.  Aliso Canyon Station Operations personnel. SoCalGas's personnel responded and arrived at the well site immediately to investigate. According to the utility, its personnel performed a sweep of the SS-25 well pad using a handheld gas leak detection device, and it did not register any natural gas leak.  However, further investigation revealed gas leaking from an unknown part of the well. The initial leak grew into to a larger leak and consequently transitioned into a full-fledged blow out in a matter of days.

SoCalGas began the well top-kill operations on October 24, 2015. This is a process where mixed fluids are pumped through the existing wellhead tree, utilizing well contractor remote pumping equipment, circulators and kill-fluid holding tanks. SoCalGas performed seven well top-kill attempts from October 24 through December 22, 2015. None of these seven top-kill attempts were successful in killing the SS-25 Well. Meanwhile, SoCalGas was drilling a Relief Well (P-39A), a new well purposely drilled to intersect the leaking well, and pump fluids down at the bottom of the leaking well to seal it. That was the utility's alternate plan B in case the top-kill attempts continued to be unsuccessful. After the seventh top-kill attempt, SoCalGas and DOGGR agreed that the top-kill attempts were exacerbating the frailty of the structural integrity of the wellhead and determined that it was time to attempt the bottom-kill/well control through a relief well. SoCalGas began the eighth well kill attempt of SS-25 by using the Relief Well, P-39A to intersect, and pump fluids down at the bottom of the leaking well and prevent gas from flowing through the wellbore. Relief well kill refers to when specialized liquid, such as heavy, dense drilling mud followed by cement are pumped down the relief well to stop the flow of gas from the reservoir into the damaged wellbore. This attempt was successful and it controlled the SS-25 blow-out on February 12, 2016. SS-25 was confirmed sealed on February 13-15, 2016 and subsequently plugged and abandoned.

Prior to the successful well kill operation, SoCalGas explored other mitigative measures such as reducing reservoir inventory pressure, by withdrawing gas from the reservoir and delivering it into the transmission pipeline system, thereby reducing the leak flow rate.  In addition, the utility also considered developing engineering solutions to capture the leaking gas but abandoned the idea because of safety concerns. SoCalGas conducted air sampling and monitoring in the surrounding communities. CPUC and DOGGR issued Directives to SoCalGas to suspend and cease gas injection into the reservoir until further notice and perform gas leak surveys in the surrounding communities. Many Federal, State and local government agencies participated in this emergency response. All the 114 gas storage wells in Aliso Canyon fields had to go through stringent Battery 1 & 2 Diagnostic and integrity testing and pass or be plugged and abandoned as prescribed in DOGGR's new regulations. DOGGR monitored the testing of these wells, reviewed and approved 65 for injection and withdrawal and they are currently in service. SoCalGas has plugged and abandoned 4 wells and permanently isolated 44 wells. SoCalGas plans to permanently plug and abandon 48 of the wells. There are two wells remaining, one well is near completion of Battery 2 testing before it goes into service and the other well is going to be plugged and abandoned.

Impact of the Gas Leak on the Communities

In response to the gas leak, SoCalGas relocated more 8,000 households to hotels and homes in communities that were not affected. Also, two schools were temporarily relocated. The Governor's office charged the Office of Environmental Health Hazard Assessment (OEHHA) of the Cal Environmental Protection Agency (Cal EPA) with reviewing public health concerns pertaining to the gas leak.  Many federal, state and local regulatory agencies and emergency response providers were involved in addressing various aspects of the leak, including public health and environmental impacts, well-control operations, community involvement, media communications, and public outreach.

The federal Environmental Protection Agency, Centers for Disease Control and Prevention, Pipeline and Hazardous Materials Safety Administration (PHMSA) and the National Oceanic and Atmospheric Administration (NOAA) assessed the public health and environmental impacts associated with the leak at Aliso Canyon. OEHHA searched for "recommended exposure limits" (REL) equivalent values for the natural gas odorants t-butyl mercaptan and tetrahydrothiophene but found that there are insufficient studies available to establish an REL and to determine the long-term effects of exposure to these odorizing additives. Also, OEHHA reviewed and analyzed the substances used in the control activities known as "kill fluids" and the possible air pollutant release mechanisms in addition to the onsite environmental sampling data, to further understand the potential for exposure from site-related air emissions and concluded that "No long-term health consequences would be expected."

The experts determined that further research is needed to determine the acute and chronic effects of exposure to natural gas odorants t-butyl mercaptan and tetrahydrothiophene.  The South Coast Air Quality Management District's (SCAQMD) independent Hearing Board approved a legal order that requires SoCalGas to fund a study (to be completed by a third party) of the potential health effects of exposure to the gas leak.

The Root Cause Analysis (RCA)

The CPUC and DOGGR initiated a formal root cause analysis of the leak at SS-25 through an independent third-party contractor. Blade Energy Partners (Blade) was selected by CPUC and DOGGR to conduct the independent Root Cause Analysis (RCA) of the SS-25 Well blow out without supervision or interference from any entity. During its RCA, Blade ran several well logging diagnostic tools including Noise and Temperature logs (SNL and HPT logs) to take high precision measurements of the subsurface temperature in the tubulars and to identify possible areas of fluid flow behind the well's 7-inch Casing. The other diagnostic tools Blade deployed were MID and MVRT logs.  These logging tools are designed to inspect downhole tubulars for potential pipe body damage/defect. The MID log tools are capable of assessing through three barriers of tubulars in one run (2-7/8-inch tubing, 7-inch Casing and 11-3/4-inch Casing) and determine whether there has been metal loss. The MVRT log tool was used to detect defects on the inside and outside diameter (ID & OD) of the 2-7/8-inch tubing. The results of these logs suggested the following:

Blade performed an extensive and detailed investigation that leveraged modern material science technology and tools to evaluate the metallurgy, mechanics, chemistry and microstructure of the Tubing and Casing. The company also employed the latest state-of-the art diagnostic technologies such as Macro-Fractographic Examination, Stereo Microscopy, Micro-Fractographic Examination, Scanning Electron Microscopy (SEM), Focused ion beam (FIB X), Finite Element Modelling (FEM) and many more. Given the strength and effectiveness of these advanced and superior technological tools, Blade was able to diagnose, analyze and draw conclusions on the primary root causes of the SS-25 blow-out.

The comprehensive and rigorous safety review requires that each of the 114 active wells in the Aliso Canyon facility either pass a thorough battery of tests in order to resume gas injection or be taken out of operation and isolated from the underground gas reservoir. SoCalGas was mandated to perform casing assessment on the wells which consists of Battery 1 tests (Temperature and Noise logs) and Battery 2 tests (Casing Wall Thickness Inspection, Cement Bond Log, Multi-Arm Caliper Inspection and Pressure Test) and any well that did not pass these two tests is either remediated with new tubing and accessories or plugged and abandoned.

In addition, DOGGR's New Underground Gas Storage Regulation incorporated most of the Emergency Order 1109 requirements, that all gas storage wells that are allowed to inject gas into the Aliso Canyon facility and other underground gas storage fields perform the following safety assurance inspections:

DOGGR determined that 65 Wells have passed the rigorous Battery 1 & 2 testing and were reviewed and approved. DOGGR indicated that SoCalGas has chosen and plan to plug and abandon (P&A) 48 wells.  One well is near completion of battery 2 tests to be returned to service.

Also, DOGGR issued an Order 1118 that mandated SoCalGas to identify and assess the potential geologic, seismologic, and geo-mechanical hazards at Aliso Canyon Storage Field. On March 20, 2019, SoCalGas completed and submitted the study of the geotechnical hazards present at Aliso Canyon Storage Fields. The study's identified hazards include the threat of strong ground shaking due to earthquakes, associated displacements on faults that intersect the wells used for gas injection and production, and landslides that might result from earthquakes or severe precipitation. These threats were assessed, modeled with prototypes and characterized. One of the conclusions of the Probabilistic Fault Displacement Hazard Analysis is that "Earthquake distributions in Southern California indicate a reduced likelihood of displacements at wellbore depth for smaller earthquakes."

U.S. Department of Transportation - Pipeline and Hazardous Materials Safety Administration (PHMSA) - was among the many federal government agencies that participated in the emergency response.

On June 22, 2016, Congress enacted the PIPES Act of 2016 (Public Law No. 114-183).  The Act required PHMSA to issue, within two years of passage, "minimum safety standards for underground natural gas storage facilities." In addition, the Act expressly allows states to adopt more stringent safety standards for intrastate facilities, if such standards are compatible with the minimum standards prescribed in Title 49 Code of Federal Regulations (CFR), Part 192 Section 192.12 of the regulation. On December 19, 2016, PHMSA published in the Federal Register an interim final rule (IFR) that revises the Federal pipeline safety regulations to address critical safety issues related to downhole facilities, including wells, wellbore tubing, and casing, at underground natural gas storage facilities. However, the IFR was challenged in the court by certain parties and that challenge has not yet been adjudicated.

8/9/2017 - SoCalGas submitted a workplan to DOGGR, pursuant to Order 1118, for identifying and assessing the potential geologic, seismologic, and geo-mechanical hazards at Aliso Canyon Storage Field

3/20/2019 - SCG completed and submitted study of the geotechnical hazards present at the Aliso Canyon Storage Field to quantify the level of each hazard and determine the impacts that such events might have on the facility. 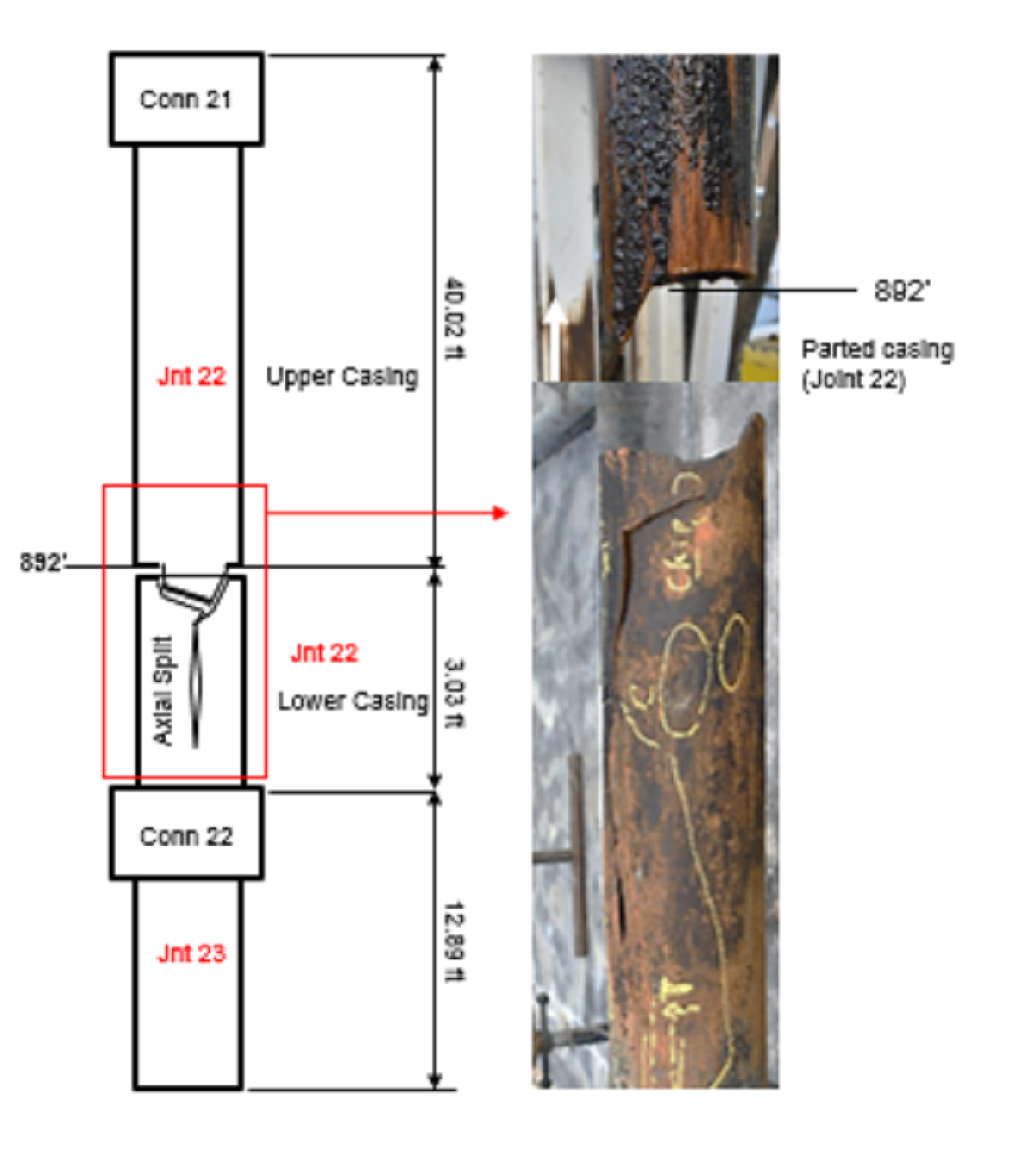