Combined Heat and Power, also referred to as cogeneration, is the simultaneous generation of useful heat and electricity from a single fuel source. Most often, heat created during power generation (for example, steam generated to run a turbine) is reused for another activity (such as warming a greenhouse or facilitating a chemical reaction) instead of being vented or radiated to the environment. This transformation of a waste product into a useable input increases the efficiency of the fuel source. Employed strategically, CHP can improve the efficiency of facilities and help reduce statewide GHG emissions.

The CPUC supports the deployment of CHP, recognizing the potential contributions CHP can make to the state's energy needs and greenhouse gas mitigation objectives.

CPUC’s program follows Commission Decision (D.)10-12-035, which adopted a Settlement for Qualifying Facilities and Combined Heat and Power (QF/CHP Settlement). The QF/CHP Settlement was the result of an 18 month-long negotiation between the investor-owned utilities, CHP trade representatives, and ratepayer advocacy groups to clarify state and utility obligations under the federal 1978 Public Utility Regulatory Policies Act (PURPA). The QF/CHP Settlement:

CPUC’s QF/CHP Program, which implements the QF/CHP Settlement, requires that:

Progress toward the MW and GHG goals is tracked via QF/CHP Program Semi-Annual Reports IOUs submit to CPUC’s Energy Division. Links to download reports are provided in the ‘Reporting’ section below.

The QF/CHP Settlement required procurement of 3,000 MW of CHP capacity by 2018. Responsibility to meet this goal was distributed among California’s three largest IOUs. The table below summarizes each utility’s obligations and their current progress.

The QF/CHP Settlement also required California’s three largest IOUs to reduce GHG emissions by 4.82 Million Metric Tonnes (MMT) by 2020, consistent with targets in the 2008 California Air Resources Board scoping plan. This goal was modified later by CPUC in 2015’s Decision 15-06-028 to 2.72** MMT to:

**Closing of existing CHP facilities during the Initial Program Period resulted in a net GHG debit of 0.023 MMT, per the Settlement terms. In August 2016, this debit was distributed to the IOUs based on each IOU's share of the California Energy Commission published retail sales, pursuant to Term Sheet Section 6.4.4, increasing the D.15-06-028 combined goal to 2.743 MMT (reflected in the table below).

The table below summarizes each utility’s GHG emission reduction obligations and their current progress. The target for each IOU was based on the volume of the individual IOU’s retail sales from bundled and unbundled customers within their service territories. 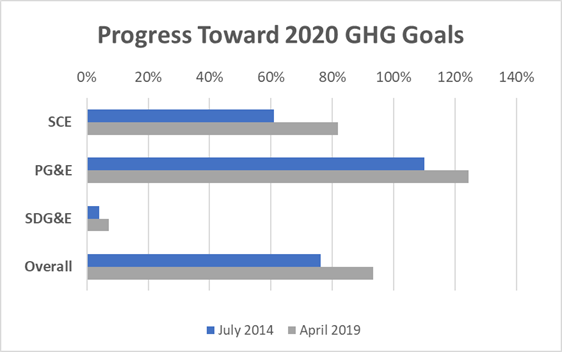 Two data sources for additional information on IOU use of CHP facilities are available to the public:

The CHP Reporting Template (Version 3.3.3) is also available for download. Reported facilities in the template file are fictitious and are provided for demonstrative use only.

These reports contain information on each utility’s Qualifying Facilities under the Public Utility Regulatory Policies Act (PURPA), which include CHP (cogeneration) facilities as well as other forms of small, renewable  energy resources that are not part of CPUC’s QF/CHP Program.

Decisions and Other CPUC Documents

The following Decisions and docket cards correspond with important points in the development of CPUC's Combined Heat and Power Program. Decisions are formatted: D.Year-Month-Index Number.

Each link in the table below reflects an agreement or action between an IOU and a specific CHP facility or facilities. These actions were taken to fulfill IOU requirements pursuant to the QF/CHP Settlement and approved by CPUC. Some types of IOU/CHP facility agreements do not require approval by the CPUC on a case-by-case basis (for example, facilities using the AB 1613 FiT) and are not included in the table below.

Additional information on procurement from CHP facilities can be found on CPUC’s CHP Procurement page.