The CPUC must approve* all rates that each electric utility charges its customers. Once a utility's revenue requirement has been determined, a utility must propose what rate will be charged to customers in order to recover the revenue requirement. Rates are set in formal CPUC proceedings called ratemaking proceedings. The following types of regulatory proceedings address rates and rate design:

*Public Utilities Code section § 451 requires that the CPUC determine whether a utility's proposed rates, services, and charges are just and reasonable. *

The investor-owned utilities periodically submit an Application to the CPUC requesting to collect a certain amount of revenue from its customers. This amount of revenue is intended to cover the utility’s costs plus a pre-approved rate of return, established in the Cost of Capital proceeding. The CPUC reviews this request and approves or modifies the amounts requested. This is the General Rate Case Phase 1 Process. Think of this as determining the size of the “pie” that the utility can have.

Lastly, the utilities propose different methods for collecting the 'slice' of the pie from each customer class (e.g. residential, commercial, agricultural). At its most basic, a utility divides the amount that needs to be collected from each class by the forecasted or historical amount of sales in that class, resulting in a ¢/kWh rate. Other rate components are also derived from this process.

A time of use rate has different prices for when energy is used. Electricity consumed at peak times is charged at a higher price than electricity used at off-peak times. These times are stated within the tariff.

A demand rate charges customers a $/kW** for their demand as well as a ¢/kWh rate for electricity consumed. Demand charges are common for commercial, industrial and agricultural rates.

Demand charges can be either coincident or non-coincident.

Coincident charges are different amounts based on when the highest amount of energy is demanded. Peak times have the highest charges while off-peak have the lowest.

Non-coincident charges are based on a customer's highest demand, regardless of when it occurs.

* A kilowatt-hour (kWh) is the amount of electricity that will power a 100 watt lightbulb for 10 hours. For example, the average washing machine may use about 1 kWh per load.

California Alternative Rates for Energy or CARE is a program established by the California Legislature in 1988* to provide financial assistance to the California utilities' low-income residential gas and electric customers to help them afford essential utility services. In 1993, the program was also expanded to 'eligible facilities' where low income ratepayers are located, this program is colloquially called 'Expanded CARE.'

CARE provides a discount of between 30-35% off a customer's total bill, subject to eligibility requirements. The range of the CARE discount is set by the California Legislature. Funding for CARE is collected on an equal cents/kWh basis from all customer classes except street lighting.

Medical baseline was established in the same Baseline Act of 1976 which authorized baseline for all customers. The act directed the Commission to provide larger quantities of power at the baseline rate to residential customers who have special medical needs and/or are dependent on life-support equipment. A list of conditions and devices are specified in statute.

For more information on eligibility for CARE and medical baseline as well as monthly reports on these programs, use the following link:

Rates are ideally based on cost causation. Rates for each class of customer are proportionate to the costs of serving that class of customer. For larger non-residential customers, rates may be based on a customer’s demand in kilowatts (kW), as well as energy usage in kilowatt-hours (kWh).

The definition of a customer or rate class is included in a utility's tariff book.

Time-of-use is a rate plan in which rates vary according to the time of day, season, and day type (weekday or weekend/holiday). Higher rates are charged during the peak demand hours and lower rates during off-peak (low) demand hours. Rates are also typically higher in summer months than in winter months. This rate structure provides price signals to energy users to shift energy use from peak hours to off-peak hours. The chart below shows the pricing for an illustrative time-of-use rate plan. Red indicates high price periods, yellow indicates moderate price periods, and green indicates low price periods.

Time of use pricing encourages the most efficient use of the system and can reduce the overall costs for both the utility and customers.

Prices are predetermined for each time period. Prices do not adjust according to day-to-day changes on the wholesale electricity market.

Currently, all commercial, industrial and agricultural customers in California are required to be on a time-of-use plan. Residential customers can choose to be on to time of use plans, by contacting their utility.

If customers have energy usage that can be shifted from peak hours to off-peak hours, they may be able to reduce their energy bill by switching to a time-of-use rate plan. For example, customers could run large appliances like dishwashers and washing machines at off-peak hours. Electric vehicle owners may also benefit from switching to a time-of-use rate plan if they charge their vehicles overnight.

Links to utility time of use sites:

A minimum bill or minimum charge is the minimum amount that the utility can charge customers for service. This charge only applies to customers whose monthly usage falls below the amount required to support distribution and billing related costs.

The CPUC authorized a change to minimum billing in the Residential Rate Reform proceeding in 2015. The current approved amount for minimum bills is $10 or $5 for CARE customers. Some utilities calculate minimum bill as a daily charge, which will add up over the course of the month to roughly $5 or $10.

What is a "baseline" of electricity use?

A "baseline" of electricity use is a basic amount of power - in kilowatt hours (kWh) - that meets a significant amount of the "reasonable" energy needs of the average residential ratepayer. The 1976 Warren-Miller Lifeline Act established the baseline statute (CAL PUC Code § 739) in response to the energy price spikes of the late 70s. The baseline statute is meant to provide an energy allowance for basic energy needs at a lower rate and sets baseline amounts between 50-70% of average household consumption.

Does my baseline cost less than other energy I use?

Yes, by state law the baseline quantity must be priced lower on a per kWh basis than other energy you use during the month.

How are baselines determined?

Baselines are usually adjusted every three years during a utility's general rate case.

How many kWh of baseline energy am I entitled to?

This largely depends on where you live. California has a diverse array of climates, and therefore the "reasonable" energy needs of a Californian changes depending on whether they live by the coast, in the mountains or in the Central Valley. Baseline is set between 50-70% of average household consumption within a given climate zone. Baselines also vary by season, with generally smaller amounts in the winter due to decreased need for air conditioning.

Climate zone maps and links to baseline information for each large utility are shown below: 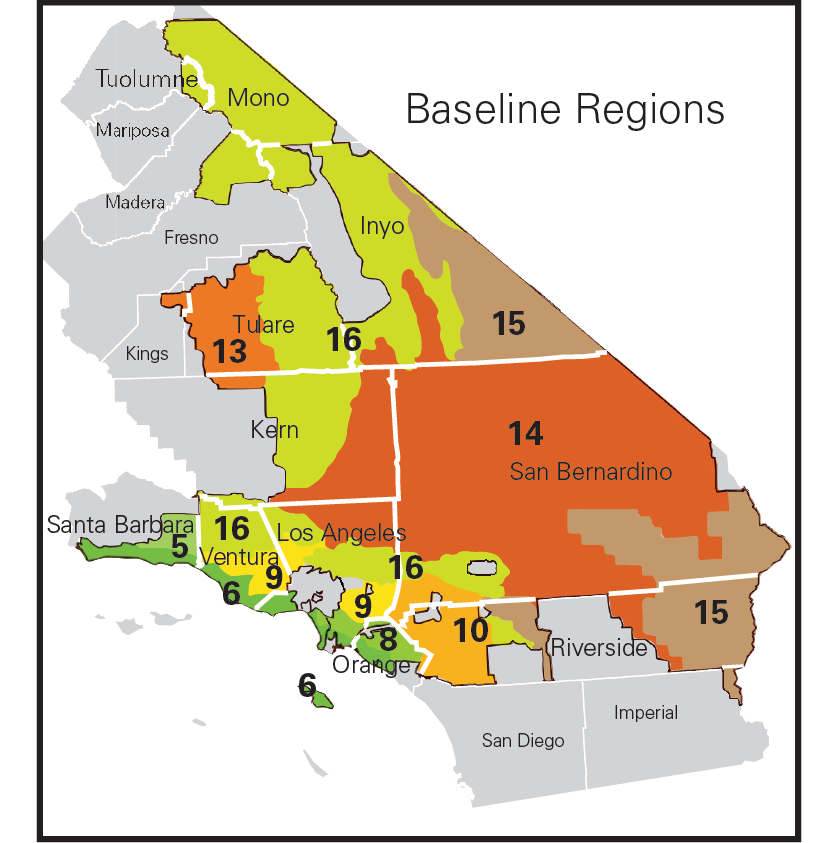 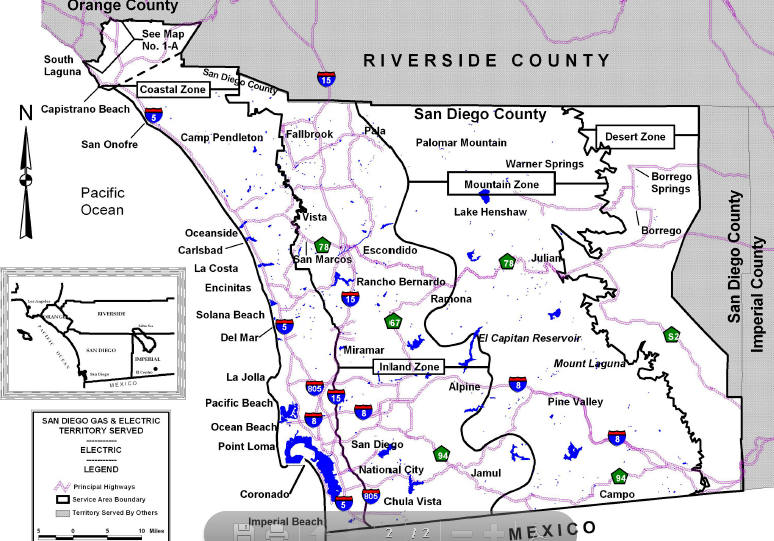 A tariff is a pricing schedule or rate plan that utilities offer to customers. Along with the pricing plan, there may be certain rules for each tariff a utility offers, such as the times or seasons when prices will vary, eligibility for a tariff, when/how a customer can join or leave the tariff, what type of meter must be installed and more. Other things that can be found in a utility's tariff book include sample forms that customers may be required to fill out, rules for applications for service, bill adjustment, low-income programs and service area maps.

Tariffs are governed by CPUC General Order 96-B which lists all information that utilities are required to provide in their tariff books. A utility must have CPUC approval before changing any of it's tariffs. Before any changes, a utility must file an advice letter, which is then reviewed by the CPUC.

Links to utility tariff books are below: